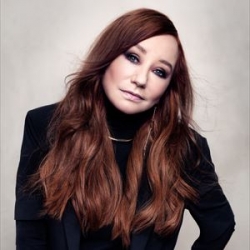 Tori Amos has never stopped making music. At 14 she won a local song-writing contest (in Baltimore) and, with the help of family and friends, released a 7" single aged 17 (in 1980). Eleven studio albums and 10 Grammy nominations later, Amos is still going strong.

Originally considered something of an 'alternative' artist, her skills as a songwriter and pianist gave Amos' music a broad, eclectic appeal. Yet her only UK No 1 to date, 1996's remixed Professional Widow, was still eyed as something of a departure from earlier singles (such as Cornflake Girl). Producer Armand van Helden had given 'Professional Widow' a cutting edge house remix and, with it, given Amos a worldwide smash hit.

But after the light comes the dark and Professional Widow was, in the UK at least, an abrupt bookend to five years of pretty solid chart activity. As the new century dawned, Tori Amos kept writing, recording and earning plaudits for her live shows and concepts but slipped from the radar a little. Through wrangles with record labels, she remained prolific and put out six albums in the first decade of the new millennium.

Her seventh album since 2000, and twelfth in total, titled 'Night of Hunters', is set for release in September 2011. Amos said of the new record: "I have used the structure of a song cycle to tell an ongoing, modern story. The protagonist is a woman who finds herself in the dying embers of a relationship. In the course of one night she goes through an initiation of sorts that leads her to reinvent herself allowing the listener to follow her on a journey to explore complex musical and emotional subject matter." Of course.

Following the planned release, five dates have been scheduled for the UK and Ireland; the Royal Albert Hall on 2nd November, Manchester Apollo on 4th, Glasgow's Royal Concert Hall on 6th, the Waterfront Hall in Belfast on 8th and Dublin's Grand Canal Theatre on 9th November. No doubt a chance to hear the new material live and excerpts from Tori Amos' outstanding back catalogue.