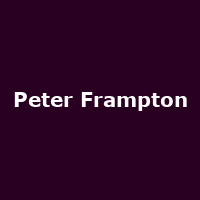 Although Peter Frampton may be known to younger generations from his cameos in The Simpsons and Family Guy, for more mature rock fans - especially America's baby-boomers - his music remains the soundtrack to their lives.

From Beckenham, Kent, Frampton took the US by storm in the mid-70s. Classic hits like 'Show Me The Way', 'Baby I Love Your Way' and 'Do You Feel Like We Do' are still mainstays of rock radio there and around the world. His breakthrough live album, 'Frampton Comes Alive!', sold a staggering six million copies in America alone. According to the woman herself, Frampton is one of Oprah Winfrey's favourite artists.

After sixteen albums and nearly 40 years, Peter Frampton remains an iconic rock figure around the world and he is playing five dates in the UK in November 2011 to mark the 35th anniversary of the release of Frampton Comes Alive! - the three-hour show will include the album in full.

The short tour begins on 11th November at Manchester's Bridgewater Hall, moving to the Corn Exchange, Cambridge the next night. Frampton plays the Hammersmith Apollo (13/11) and Birmingham's Symphony Hall (15/11) before closing the tour at Glasgow's Royal Concert Hall on 16th November.