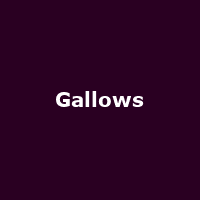 Watford hardcore punksters, Gallows, return for a few dates this summer. While currently recording their third studio album, due out later in the year, the noisy quintet have announced a mini UK tour in July, which will see them roar their way to crowds in Bournemouth (6th), Folkestone (7th), Southend (8th), Swansea (10th) and Gloucester (11th), during which it's likely they will premiere some of the new material.

The band have also been added to the bill of the Sonisphere festival, playing alongside the likes of Kid in Glass Houses, Sum 41 and The Mars Volta, on Saturday 9th July.

The band have two albums under their belts - their 2006 debut, 'Orchestra of Wolves' and the 2009 sophomore opus, 'Grey Britain', both of which made it to the charts, with singles such as 'In the Belly of a Shark' and 'Vultures (Acts I & II)'.