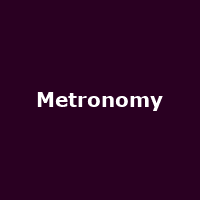 Following the imminent release of their third studio album, 'The English Riviera', due out on Monday 11th April, Metronomy will embark on a hectic tour schedule, kicking-off on 14th April through to 27th April, with the likes of Nottingham, Norwich, London (Shepherd's Bush Empire), Portsmouth, Oxford, Cardiff, Wakefield, Newcastle, Edinburgh and Aberdeen on their itinerary.

This will be followed a handful of festival appearances, including The Parklife Weekender 2011 in Manchester on 12th of June and London Wireless Festival 2011 on 3rd July.

They will see summer off with the second leg of their 'English Riviera' tour in September, between the 20th and the 28th, paying a visit to the cities of Southampton, Leeds, Sheffield, Glasgow, Liverpool, Manchester, Birmingham and Bristol.

Prior the album, Metronomy have released the two singles, 'The Look' (watch the video, above) and 'She Wants', the latter which is currently available to download for free from the band's website (www.metronomy.co.uk).

Londoners, please also note that you can groove to the beats of Metronomy bassist, Olugbenga, as he regularly hits the decks at the Queen of Hoxton- next date is 16th April alongside Gavin and Stacey's Mat Horne.

Tickets for the September tour, priced at £11, go on sale tomorrow, Friday 8th April, at 9AM.