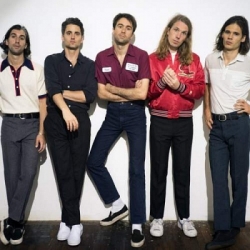 The Vaccines have proven something of a phenomenon since last autumn, selling-out shows left, right and centre, appearing on the NME Awards Tour last month with Crystal Castles, Magnetic Man, Everything Everything (most of which also sold-out), and their forthcoming April dates in England and Scotland have all sold-out, with the exception of Birmingham and Bristol, for which a handful of tickets are still available.

The band were due to play a wee tour in the Highlands, with a date in Aviemore (tomorrow), Inverness, Ullapool and Stornoway over the next few days, but have been forced to cancel due to an operation needed on lead singer Justin's throat. An official statement reads:

Regretfully the Vaccines must cancel their tour of the Highlands next week. Unfortunately, Justin has to have a further routine operation on his throat. This is scheduled for April 11th and as a preventative measure his doctors have advised the band to cancel the smaller roomed shows on the tour as these are the ones which prove most demanding on his voice and can cause permanent damage.The Vaccines sincerely apologise for any inconvenience and we are trying to reschedule the dates for September. We will advise asap when we have the new dates scheduled.

Once we hear of the new dates, we will of course let you know.