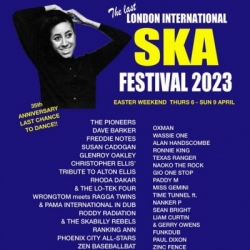 Hats off to the person who came up with this brilliant idea: while we have had our share of indie urban fests over the past few years, someone has had an epiphany to organise a big extravaganza for all the rude boys and girls worldwide. So, as last year's inaugural instalment proved a success, the London International Ska Festival returns for a second season, which will take place at the Clapham Grand next month, from Thursday 21st to Sunday 24th April.

On the menu, the opportunity for novices to realise that there's more to Ska than The Specials and Madness, as the 22 bands and ten international DJs (some coming from as far as Japan) will demonstrate.

Live, performances by the likes of the mighty Ken Boothe on day one, Dave and Ansell Collins on the Friday, The English Beat feat. Dave Wakeling on the Saturday and Bob Andy and Marcia Griffiths on the Sunday, all headlining appearances by Dub Pistols, Lee Thompson Ska Orchestra (led by Madness sax man Lee Thompson - standing-in for The Ska Flames from Japan), Giuliano Palma & The Bluebeaters (Italy), The Caroloregians (Belgium), Skaos (Germany), Napoleon Solo (Denmark), Bim Skala Bim (USA),among many others.