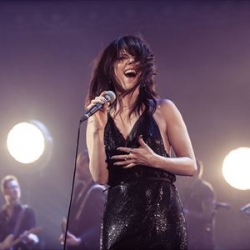 Dubliner rockabilly songstress Imelda May has announced UK tour dates for November 2011. Fresh from supporting Meat Loaf on his recent tour, May embarks on a run of fourteen autumn dates on the back of the considerable commercial success of the last two or three years. Her third studio album, 2010's 'Mayhem', made the UK Top Ten and number one in her native Ireland.

In addition, 'Johnny Got a Boom Boom', 'Big Bad Handsome Man' (both from 2008 sophomore record 'Love Tattoo') and other serial floor-thumpers seem rarely to have been out of rotation on radio stations everywhere.

She's also found a healthy appetite for her talents in the US, touring there with Jamie Cullum and also appearing at the Grammy's. In spite of this international acclaim, May still continues to appear regularly at the Candy Box burlesque club in Birmingham.

The November dates begin on Armistice Day at York's Barbican Centre, closing at the Academy, Glasgow on Tuesday 29th November. In the meantime, Imelda May will be taking in the ragged splendour of Manchester's Apollo (12th), The Hexagon in Reading (18th) and the Warwick Arts Centre in, er, Coventry (19th) - to name but a few.

Tickets are priced at £23.50 and will be available here from 9AM on Friday 11th March, with the exception of Glasgow, tickets for which are already on sale!