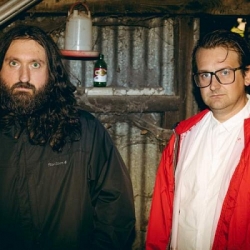 'The Young Knives ... are dead'... or so some might have thought, but far from it, as it seems they have just taken their time to craft the follow-up album to their 2008 release, 'Superabundance', entitled 'Ornaments from the Silver Arcade', which will hit the shelves on 4th April.

Until then, the trio have got a new song out, 'I love My Name' of which they say:

It's sort of a song about how a name is one of the only things that you really have all your life, everything else about you moves and changes. Whilst writing this song we realised that it had a bit of an R'n'B vibe, so when we were demoing it we tried to enhance that sound. This is not the finished version and it may not even make it onto the album but we thought you would like to hear it.

Erm... well, come May, you will get the opportunity to hear it live along with the other new tunes on the way, as Young Knives will embark on a tour, kicking off on 16th May in Newcastle through to 28th May in Hertfordshire, via Birmingham, Sheffield, Oxford, Borunemouth, Bristol and Postmouth.

Prior to that, the album gets a special launch gig at London's XOYO on 6th April with Bear Driver as support. Tickets for that gig cost £12.50. Tickets for the 'Ornaments from the Silver Arcade' May tour cost £10 (+ fees) and are on sale now.