Wam! Bang! Pow! Let's Rock Out to Art Brut at their May/ June 2011 Lexington residency!! 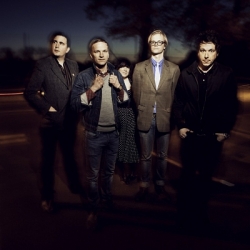 It's time to thump that exclamation mark key a few times, certainly when it comes to typing the title of alt-rock ensemble Art Brut's upcoming new album. Entitled, "Wam! Bang! Pow! Let's Rock Out!", the new album (their forth) will appear later in the spring, around the same time as a series of very special shows confirmed for London.

Eddie Argos and his joyously noisy trash-punk crew will play an entire week of shows at The Lexington from 30th May to 3rd June - that's five intimate shows at the Islington venue, all of which are bound to sell out fast. You can expect tracks from the new album, as well as plenty of selections from their catalogue, including the debut from 2005 called "Bang Bang Rock & Roll" and the previous set "Art Brut vs Satan" from 2009.

Tickets for each night cost £11.50 and you can be assured these will sell out fast. The band are also playing the Oxford Jericho Tavern tonight (tickets on the door, if you are lucky - £8, but probably best to call the venue before making a special journey).