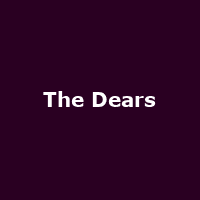 The Canadian indie rock collective, fronted by Murray Lightburn (dubbed "the Black Morrissey" due to similar vocal timbre), The Dears, will release their fifth studio album in sixteen years. 'Degeneration Street' is scheduled for 14th March and is a follow-up to their 2008 release, 'Missiles'.

The band (currently operating as a sextet), which has reunited with some of its original members (Patick Krief, Rob Benvie and Roberto Arquila), released a first single, 'Thrones' earlier this year.

Wishing them to repeat the appeal of their 2003 album 'No Cities Left' and 2006's 'Gang of Losers', The Dears will support this new album with three UK dates in April: London's Borderline on the 19th, the Ruby Lounge in Manchester on the 20th and Glasgow's King Tut's Wah Wah Hut on the 21st , leaving scope for more dates to be added along the way.

Tickets for The Dears' 'Degeneration Street' mini-tour are on sale now, costing £11 regionally, £12.50 for London (all plus booking fee).