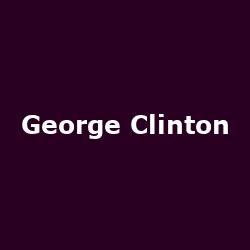 Describing George Clinton as a colourful character only serves to lump him in with Elton John and Ruby Wax - he's far more unique than that, quite frankly. A true innovator of '70s funk, soul and his own brand of P-Funk, Clinton's influence has rubbed off on just about every key hip-hop act in the past thirty years, not least for sampling his back-catalogue (but probably not his wild and crazy hair-adornments).

The legendary funkmeister will be making a return to the UK in the summer - Clinton has lined up a show at the HMV Forum on 18th June, the prospect of which will surely promote a sell-out pretty quickly. Tickets are now on sale, priced at £32.50.

His work with Parliament and Funkadelic (alongside Bootsy Collins, Bernie Worrell, Maceo Parker et al) has been well-documented - "One Nation Under a Groove", "Bop Gun", "(Not Just) Knee Deep" and "Tear The Roof Off The Sucker" all came from the same stable, as well as his solo work and collaborative contributions along the way. Listen to Outkast or 2Pac if you don't believe me... or even Prince. Just don't expect drippy-ballads - this is the funk and Mr Clinton and co will be serving it up, slice after funky slice.