War Child, what is it good for? Absolutely everything - Mark Ronson to feature in Post-Brits 2011 show 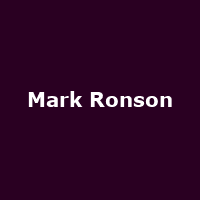 Last week, we hinted at some possible forthcoming War Child fund-raising action and, boy, were we right! Mark Ronson has been confirmed as the main headlining act at this year's post-Brits show at the IndigO2 portion of the O2 on 15th February (that's next Wednesday, folks), as well as The Bees and a stream of special guests (likely to be the odd award-winner or nominee, here and there).

The show will start straight after the Brit Awards go off air at around 10pm and will see Mark Ronson host the event as well as appear with his Business International outfit. They are set to perform the hits and more from the albums "Version" and "Record Collection", accompanied by the occasional ad-hoc guest. You will never know who it's going to be next!

Tickets for the charity bash go on sale on Tuesday morning (8th Feb) at 9am, priced at Â£15 for standing or Â£30 for reserved standing. Demand will be huge!

Ronson states on the War Child website (www.warchild.org.uk) that "to play the War Child show is such a giant honour. And since I'm guilty of YouTubing the 2009 clip of Coldplay and Gary Barlow doing "Back For Good" for War Child at least 180 times, I know we better (sic) pull off some magical moments". We're sure he will...

The Temper Trap have been announced to join Mark Ronson and The Bees on the night. There are still a few tickets available!