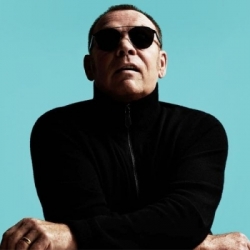 It was a busy year in 2010 for UB40 members and ex-members - the aforementioned band's landmark album "Signing Off" was given a dutiful and successful re-issue in the autumn and Ali Campbell, erstwhile singer with the group, released his fourth solo album. "Great British Songs" managed a Top 20 placing after release, not bad for a covers album issued during the Christmas rush.

Ali's next release is a DVD entitled "Live at the Royal Albert Hall" which should appear just before his next UK tour which was announced this week. The confirmed dates so far include Oxford on 5th May, London's IndigO2 on the following night plus other 'O2 Academy' venues around the country, finishing up in Birmingham on the 27th. Tickets will go on sale at 9am this coming Friday!

In addition to headlining, he will also play as part of a wider line-up of British reggae stars at the Barbican this Saturday (5th) with Pauline Black, Dennis Bovell, Neville Staple and Carroll Thompson. The sold-out concert forms part of an upcoming broadcast on the BBC entitled "Reggae Britannia", which is surely worth a watch - the '70s/'80s Brit-reggae scene has stood the test of time for sure.

Campbell has also been confirmed for Plymouth's VolksFest on 28th May and the Henley-based Rewind - The '80s Festival on 21st August.