The Week Ahead From 7th Feb 2011: The Feeling, Roll Deep, My Chemical Romance, Sea of Bees, Andrew Lloyd Webber's The Wizard of Oz and more 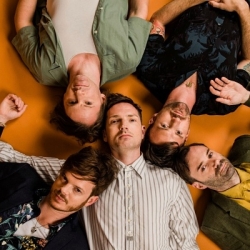 Well goodbye to January, hello to February and almost longer days - good news indeed. Next week's tours aren't quite as exciting as last week, where the big names all got their collective oars in, but there is still much to consider including grime crew Roll Deep back in action, The Feeling with some mainly sold-out pop action and a bit of Lloyd Webber's new musical, Wizard of Oz.

The BRIT-nominees from Sussex return with a string of dates from Monday onwards, starting in Middlesbrough. Only this one, Dundee and Portsmouth are available to buy at face value (and they're selling quickly at just £12) - the rest are all sold-out! The Feeling are still expected to release a third album very soon (it's only been 18 months in the rumour-mill).

The grime and urban collective heads out on the road from Thursday onwards, beginning a UK tour in York before continuing to Newcastle, Glasgow and more. Roll Deep will finish up at XOYO in London on 28th February, with support for the whole tour from Platnum, Mz. Bratt, Angel and TJ Lyricz. Recent album "Winner Stays On" is sure to feature throughout the tour. Tickets are £11 - £12.

Getting more glam with almost every new song, MCR follow up the well-received album "Danger Days...." with this UK tour that starts from Wembley Arena on Saturday evening (seats are sold out, by the way). It's an arena tour so expect big cities and prices around £27 - £28. Recent single "SING!" was issued last week.

Not a band at all, but nu-folk musician of note, Julie Ann Bee. She begins her tour of the UK on Monday and has a full supporting cast in the form of English folky-coupling Trevor Moss and Hannah Lou and singer-songwriter prodigy, James Walbourne. Bee recently signed to Heavenly Recordings and an album should follow soon - meanwhile, tickets for the dates cost £5!

Never under-estimate the power of nostalgia, so they say - Ocean Colour Scene, from the not-too-distant '90s, will return to touring from Wednesday onwards when they touch down in Newcastle, before heading off around the country. As well as 'the Toon', Cardiff, Glasgow and Birmingham have sold-out - the rest are £23.50 - £25.

After forming the under-rated Thieves and collaborating with Bernard Butler and Michael Nyman, the man returns to 'live' basics for his next UK tour, which starts on Tuesday in London. The jaunt is in support of an upcoming CD/DVD package cunningly-titled "Live" and tickets cost £16.50 - £20.

Fancy something ear-splittingly heavy instead? Kind-of rock and kind-of experimental, this Liverpool outfit have their roots firmly in metal and all six of them are reporting for duty from Durham (on Wednesday) to Glasgow, Sheffield and more until a London date at the Scala - tickets are £15 - £17.50.

Want to take the 'laydee' to a pumping Valentine's club-night? Feel the need to sweeten up your buff partner with some rump, bump 'n'grime? Then you need to head to Peterborough for a Tim Westwood double-header at the weekend. Club Revolution in the town will host two special and decidedly intimate lil soirees in the company of the MOBO-winning hip-hop legend. Tickets are £8.

A title that does what it says on the proverbial tin, this new adaptation features Michael Crawford and the winner of the TV talent-show, Over The Rainbow. Playing at the London Palladium from Monday onwards for at least seven months, all eyes will be on this new musical from the king of the genre. Tickets start from £21.75.

The Noel Coward Theatre will play host to this thrilling show that draws together four of the biggest names in rock 'n' roll. From Tuesday onwards, you can witness the story of Elvis, Johnny Cash, Carl Perkins and hellraising Jerry Lee Lewis as they collaborate and fall apart within a short space of time. Tickets start from just £5 (balcony seats!).

As if Lloyd-Webber and Elvis aren't enough for you, more musical action is set to take place at the Trafalgar Studio from Tuesday onwards. Ordinary Days was written by Adam Gwon and tells the tale of a young Uni-student who loses her graduate thesis. This one event acts as a catalyst for other happenings in the lives of four New Yorkers. Tickets are £25.

And so begins a fortnight of colour, passion and all things Spanish, featuring dance, flamenco, opera and ballet at London's Sadler's Wells. Spanish flamenco-singer Estrella Morente starts proceedings on Tuesday, along with a whole programme to dazzle and delight. Ticket prices vary, but the Israel Galván performance on Wednesday has already sold out.

Snake In The Grass

Alan Ayckbourn's work continues to be appraised - The Print Room in London is the latest theatre to feature his work, this time the ghostly and gruesome goings-on in Snake In The Grass. Tickets cost £12 - £16 for the production which runs from Wednesday onwards.

The football-crazy stand-up comedian and observational story-teller, hits the South-West of England from Tuesday onwards, starting with sold-out shows in Plymouth and Torquay. You'll be pretty lucky to get into any of his upcoming nights - we suggest trying the venues first.

Does my bum look big in this? Apparently not anymore - according to the lovely Arabella, 'The Real Me Is Thin' (that's the show's title). Kingston-upon-Thames will welcome the acclaimed writer and comedian on Thursday for one of a few ad-hoc appearances around the UK. This one costs £12 (or for £8 and your own cushion, you can sit in the 'pit'!).

This exhibition and lifestyle show should dispel the question that Arabella Weir asked all those years ago - your bum will NOT look big in anything because the experts on hand in Battersea Park at the weekend will ensure your big day goes without a hitch. Tickets for the exhibition cost £16 - the show runs from Friday to Sunday.