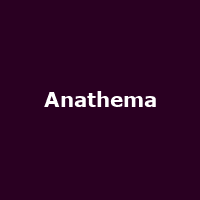 Following their critically acclaimed 2010 'We're Here Because We're Here' album, Anathema are set to tour the UK this February and are due to announce details of new EP 'Dreaming Light' in the coming weeks.

Anathema returned last year with their new album, We're Here Because We're Here. Awarded Classic Rock's Prog Album of the Year as well as a host of other accolades, this is the first collection of new material from the band since the 2003 album, A Natural Disaster.

Formed in Liverpool in 1990, the band's sound and musical vision has continually evolved over the ensuing years while always remaining true to the band's original goal of creating forward-thinking, meaningful, passionate, and honest music. With each release they moved beyond the boundaries of limited scenes and pigeon holes, creating a complex and emotive atmospheric sound.

Anathema have been at the forefront of the UK rock/metal movement for many years. They began their journey as pioneers of melodic heavy music, influencing a myriad of bands to follow them, before outgrowing all genres and limitations as they fearlessly explored new territory and new ways to express feeling through sound.

The band start their UK tour on 9th February at Live Lounge in Durham, then go on to Cathouse in Glasgow on 10th, Academy 2 in Sheffield (11th), Rescue Rooms in Nottingham (12th), The Assembly in Leamington Spa (14th), Manchester Academy 3 (15th), Wolverhampton Slade Rooms (16th) and finally Scala in London on 17th February for their last date.