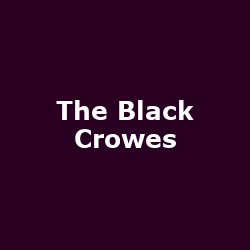 The Black Crowes haven't always enjoyed the high profile in the UK that their success and international reputation merits. Yet, after 20 years, the Black Crowes' ten or so albums have amassed global sales in excess of 30 million.

The band reformed in 2005 after a three-year break and have been on a sold-out, critically acclaimed tour to mark 20 years in the business and the fact that they are about to embark on a new indefinite 'lengthy hiatus'. Do you remember when bands used to break up?

Anyway, the Crowes are going on hiatus 'to spend time with family and work on other projects', which is a shame since critics seem to agree that their recent US dates, including a six-show run at San Francisco's Fillmore Auditorium before Christmas, showcased a band still in their prime.

That vanguard of American rock culture, Rolling Stone, amongst others, loved it. The Black Crowes will now set off on the final eight dates of the tour from 7th - 18th July, concluding in Amsterdam with a two-night engagement at the Paradiso.

As with many of the US dates, fans at the London, Manchester and Amsterdam shows will be treated to two sets, acoustic and electric. Each show of the US leg had a different set list and including rarely performed album tracks alongside the big-hitters. Some shows ran to three hours long.

These final dates are not just a (probable) farewell from one of America's finest and most-enduring rock outfits but also a band going out at the top of their game.

The European dates begin in Milan (7th July), then onto Bilbao, Spain (9th) before UK shows at the Manchester Academy (11th) and two nights at London's Shepherds Bush Empire (12th, 13th). An appearance at the Zwarte Cross Festival in the Netherlands (15th) precedes the final two shows (ever?) in Amsterdam.