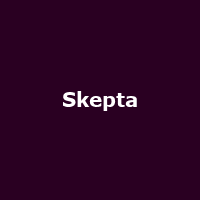 The cheek of the man, calling his debut album "Greatest Hits"! Since 2007, however, the Tottenham grime MC has racked-up a few Top 40 hits, not least with "Rescue Me" and "Bad Boy".

His recent collaboration vs N-Dubz and entitled "So Alive" didn't fare as well, but no worries - Skepta is ready to strengthen his inclusion in HMV's search for the Next Big Thing', with a third studio album entitled "Doin' it Again" and some accompanying tour-dates.

The album will see the light of day from next Monday (31st) and includes the aforementioned Dappy-heads, as well as Chipmunk and previous collaborator Preeya Kalidas on back-up duties. No further single has been announced but with 15 tunes in place you can bet one of them, possibly "Nobody Made Me", will sneak out at some point, probably March which is when his UK tour starts to kick in.

Currently the first date is in Leeds on 15th March, followed by stops in Birmingham, Sheffield (just added), Nottingham and Manchester before ending up in Cardiff - tickets are on sale now, priced at £9.50/ £10. If you're in London, you should by now be aware of Skepta's big Next Big Thing 2011 night at the Jazz cafe on 4th February also featuring Talay Riley, for which there are still a few tickets left at £10.