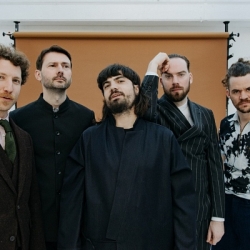 What do you do, when in less than one year you become one of the biggest alternative rock acts in your native land of Holland?

What do you do if your record tops 2010 year end lists, following critically acclaimed performances at prestigious festivals including Lowlands, Pinkpop & Glastonbury?

De Staat has made an album that meets all expectations. Machinery is the band's second album and follow-up to their stunning 2009 debut Wait For Evolution. Machinery is described by the band as a "gut-inducing slab of psycho funk." It's a dark sonic adventure that takes the listener through underground caves of blues, funk and electro where halal butchers, serial killers, whistleblowers, rats and sweat-covered bodybuilders cross paths.

Speaking about the theme of the album, lead singer and songwriter Torre Florim had this to say:

I often hear we sound like a machine when we play live... I thought it would be fun to expand on that on this record and emphasise the mechanical elements in the music.
We played a lot of rhythms, and also created crazy sounds with the guitars. I didn't want to exclusively focus on the rhythmic parts, but instead wanted to change the way we approached the tools of a conventional rock band setup. During the process of writing and creating the music, the album developed an industrial flavour that reminded us of a machine.

You can listen to Torre and see the band playing songs from the album in the video, above.

Machinery is released in the UK on Monday 7th March 2011 on Cool Green Recordings via Mascot Records. The album can be pre-ordered from Amazon - check the 'Machinery - De Staat' link in the sidebar, to the right.

You can catch the band in the UK from 6th April to 9th April, starting in Camden's BarFly, then Manchester (7th), Nottingham (8th) and finally Bristol on 9th. Support for the London date comes from Hedoniacs (playing as part of HMV's Next Big Thing series also at the Camden BarFly on 5th February). Tickets for the De Staat tour cost just £7 for London, £6 for all others.