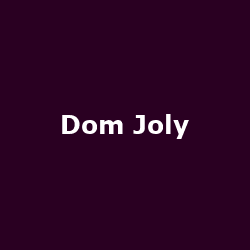 Cast your mind back to the end of the last century and the successful Channel 4 TV series, "Trigger Happy". The voice blasting "I'M ON THE PHONE!" into a mammoth sized mobile was the man on tour later this year, Dom Joly.

Since that series ended, he's been everywhere - literally. From Chernobyl to North Korea, Switzerland to Belgium and Britain to the Australian jungle (he appeared in the recent series of "I'm a Celebrity...Get Me Out of Here!" but 'only' reached fourth place), there aren't many enclaves left where you could get arrested dressed as a yeti ('tis true).

As well as his travelling, he has been blogging like mad for The Independent where he most recently revealed his exploits in Indonesia, mainly revolving around teaching his daughter to scuba-dive and observing seahorses. No doubt Joly will broach the subject, and many others, on his upcoming tour entitled "Welcome to Wherever I am". The premise of the show is simple - holiday snaps and humorous anecdotal recall with a bit of sharp-tongued wit, Dom Joly-style, with unlikely destinations and bizarre situations abound.

The tour takes in a very unlikely towns (Bedford doesn't crop up on our concert radar too often), as well as Richmond (London - opening night on 1st May), Leicester, Edinburgh and Warrington (there's another one), before ending up in Cambridge for two nights at the end of July. Tickets cost £19.50 - £20.50 and are available now.