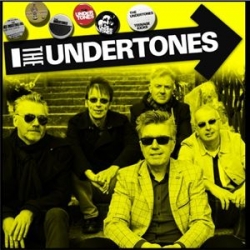 They may well be minus Feargal Sharkey, but The Undertones remain intact from their earliest days when they were a vibrant poke-in-the-eye little runt in a very large litter of tuneless punk-bands. The vitality and energy is still present, just as it was on their debut album, also called "The Undertones" and originally issued in 1979.

Some 35 years after their formation, the Derry boys will be back on tour during the spring playing that entire album, plus excerpts from the reissued "True Confessions - A and B sides" set, due for re-release on 4th April. The tour starts in Glasgow at the iconic King Tut's on 31st March, before continuing on to Birmingham, York, Plymouth etc until winding up in London on 16th April. Tickets cost from £15 and are on sale now.

The debut album contains a few very familiar Undertones classics including "Here Comes The Summer", "Jimmy Jimmy", "True Confessions", "Get Over You" and of course the perennial Peel-favourite, "Teenage Kicks". Sixteen quick-as-you-like stories influenced by heady youthful days on scruffy housing-projects, "The Undertones" is deserving of anyone's attention.

And 'attention' is something the band wants from a few of you. They are trying to gather up original members of the legendary Undertones fan-club, known as the Rocking Humdingers Club. The first 50 successful members with proper original membership will earn themselves free entry to a show, a t-shirt and a copy of "True Confessions" and, we're guessing this bit, a place in the band's hall of fame in some form. Write to the band at andy@theundertones.com to re-introduce yourself!