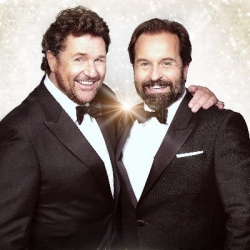 Singer Michael Ball must be one of the busiest people in show-biz right now - 2010 saw him play the role of Edna Turnblad in, record a new album ('Heroes', out 2011), tour, present his own chat-show, present someone else's chat-show, perform at the Hampton Court Palace Festival and is acting as a producer on the new West End romantic musical, "Love Story".

But not for much longer because the show is definitely coming to an end on 26th February! Plans are afoot to develop the production for a UK tour later in the year, according to the producers, meaning that you have just a few weeks left to buy bargain seats!

The story concerns two people from opposing backgrounds, he being rich and she from a tough background but both deeply in love with each other. Updated from the novel by Erich Segal (and transformed into a romantic 70s film) and scored by BAFTA-winning composer Howard Goodall, this contemporary retake is lighter in tone and darker in humour, avoiding schmaltz.

The offer is: Buy selected tickets for "Love Story" and pay £32.50 instead of £55 - a saving of a reasonable 40%. There are now also terrific 'dinner and show' packages for Valentine's Day only costing £54.99 - the link is on the same page as the other offer and the participating restaurant is Palm Court (Italian/French).

Tickets and performances are limited and to take advantage of either deal, click on the Book this Offer button!