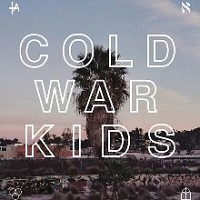 Almost five years ago, Cold War Kids appeared on the scene with the 2006 album "Robbers and Cowards", creating a modest stir of approval amongst critics and spawning a few decent singles such as "Hospital Beds", "We Used To Vacation" and "Hang Me Up to Dry". And then, not a lot else - the follow-up "Loyalty to Loyalty" (irony abound with the title), sank without much trace and it seemed as though a third album was as far-fetched as them wearing silver trousers and bobble-hats.

But album number three is looking pretty likely now - called "Mine is Yours", the 11-track collection is due for a release on 25th January and will contain the recent single "Louder than Ever" (which you can hear right here).

The tour dates next year will take in the usual big cities including Manchester Academy 2 on 20th February, Glasgow Garage (21st), Birmingham O2 Academy (22nd) and finally London's KOKO on the 23rd. Tickets for all dates are on sale now.