Warning: Spexy Beast coming to a town near you - Alan Carr's new 2011 show to go national 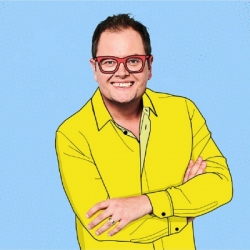 Swapping the cape marked 'Chatty Man' for the glitzy one labelled as 'Spexy Beast', is one Alan Carr who needs little introduction. The hugely-successful chat-show host, radio-presenter and, more importantly, comic-showman has recently announced a couple of low-key London gigs at some small arena or other - oh yes, that'll be the O2 and Wembley then.

Not content with those two venues, Carr has now extended the whole outing into a string of nights running for nearly two months. The Spexy Beast Tour begins in Brighton for four nights (11th- 14th September 2011), followed by two nights in Manchester, Wembley, Bournemouth, Nottingham, Glasgow, Aberdeen (1 night only so far) and many more until the O2 Arena dates on 5th and 6th November.

Tickets are available from this 9am Friday (3rd Dec) priced at £30, except for two of the London dates (22nd Sep - Wembley and 5th Nov - The O2 Arena) which are available now. We won't be surprised if more dates get added along the way - the man is in much demand!