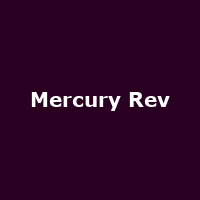 The ATP brand grows and grows with integrity every time we end up writing an article about it - and here's another reason for patronising one of their events. As part of their continuing series of classic-album live performances by key bands from the past few decades, the next 'Don't Look Back' tour will be represented by Mercury Rev.

The dream-rock ensemble from the US will tackle their fourth album, "Deserter's Songs", considered by many critics and fans alike as their most important release when it appeared in 1998. NME hailed it as their album of the year and they weren't far off - songs like "Opus 40", "Holes" and "Goddess On A Highway(Hiway)" are three of many highpoints throughout.

Joining previous 'Don't Look Back' participants such as Spiritualized, The Stooges and Sonic Youth, Mercury Rev will perform this album in its entirety at four gigs planned for May next year, starting at the Dublin Vicar St venue (18th), then Edinburgh's Queen's Hall (19th), Manchester's Bridgewater Hall (20th) and finally to the Roundhouse in London on the 21st.

Tickets will go on sale Tuesday 30th November at 10am, priced at around Â£25. Demand for all four concerts is bound to be high and you can be assured the band will line up some special guests and, possibly, some further back-catalogue exploration.