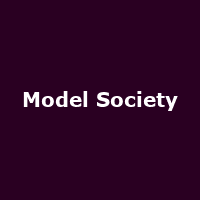 London four-piece 'Model Society' debut release 'Follow Your Dreams' is now available as a free download. After a year full of live dates including seeing them support the likes of Mark Morris (Bluetones), headline the famous Club Fandango, and showcase their talents on Balcony TV, the band are now ready with a new single and set of gigs.

The single 'Follow Your Dreams' was recorded and produced by the acclaimed Michael Boddy (The Fall, Alphabeat) after the band were lent the studio of legendary guitarist and Roxy Music innovator Phil Manzanera.

Model Society are vocalist Danny Clare, guitarist Stephen Kelly, drummer Sammy Wilko and bassist McCready. Hailing from all corners of London Town the band are Indie/Electro at the core but this description only tells a small part of the story. Drawing on influences from The Stranglers, New Order, and Bloc Party they create a quintessentially British sound that captures the past but breathes new life into the social commentary and satire of today's suburban life.

Model Society live shows have also become known as both melodic and riotous affairs with vocalist Danny Clare often not happy with the confines of a stage alone, seeing him stalk the crowd while delivering his lyrics.