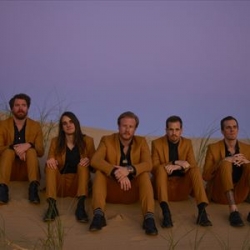 Joining a long-line of MySpace successes over the past few years (Sandi Thom et al), is The Maine from the US. Having formed in 2007, the anthemic-rock outfit soon got busy with dozens of live performances to local audiences, before being plucked by Fearless Records for a digital EP release. Their reputation gathered momentum with support slots for Good Charlotte and Boys Like Girls and their debut album "Can't Stop, Won't Stop" eventually appeared in 2008.

After appearing on the 2009 Vans Warped Tour, The Maine duly constructed their second full album, "Black and White" which got a US release in July (it's now out here as well). Having reached the Top 20 over there, it seems inevitable that this sprightly five-piece will crossover to the UK at some point. Therefore, a tour is an obvious option!

The lads have announced eight gigs for March next year, starting with Brighton on the 16th and followed by Birmingham, Leeds, Belfast etc until KOKO in London on the 24th. Tickets go on sale in the morning (Fri) at 9am, priced at £11 - £11.50.

To give you a flavour of their catchy angst-pop, you can watch the rather jolly "Right Girl" video is right here.