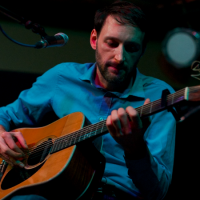 This Scottish songwriter has had all manner of critical praise heaped on him, particularly for his latest album, the sophomore "Too Long in this Condition". Released in August, the music-press immediately got a bit damp about the collection of traditional folk-ballads, in particular Roots magazine which described the singer as "One of Britain's most singular and original talents". Mojo and Uncut also drew their superlative-swords.

Personally, I struggle with certain styles of old-fart folk, but Alasdair Roberts certainly offers a youthful and contemporary take on the charming stories present throughout his repertoire. Intimate arrangements also make for compulsive listening, as heard on "The Daemon Lover" and "The Burning of Auchindoun" - head to his website to hear more.

Meanwhile, you should make every effort to see him live and Roberts has just announced some UK dates for next Spring, starting with Clitheroe on 20th April and followed by a double-date spectacular at the Slaughtered Lamb venue in London on 3rd/4th May. Tickets are available for all three dates, priced at £10 or £12.50 for London, a worthy price if you missed his recent Union Chapel gig.

Prior to these dates, Roberts will also be busy this January with an appearance at the Celtic Connections Festival in Glasgow on the19th, plus evenings at the Glee Clubs in Birmingham (27th) and Nottingham (28th) - expect to pay £10 for each of these.