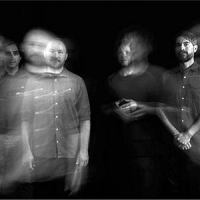 Explosions in the Sky

For fans of chiming guitars, epic drums and swathes of swirling melodic atmospheric post-rock, the news that Bella Union act Explosions in the Sky are following up their Big Chill appearance will surely bring a few ecstatic shivers down the spine.

The band has garnered much attention and love from the UK in recent years, surprisingly racking up a Top 60 album with 2007's "All Of A Sudden I Miss Everyone" and 2011 will see the band deliver their first new studio set for 4 years. The new album is as yet untitled, but Explosions have hinted at a Spring release.

All of which brings us nicely to the proposed dates which will cover Dublin's Vicar Street on 16th May, Manchester's Academy on the 17th and a cunningly inserted Roundhouse gig in London on the 19th. I say cunningly because there is a gap on the 18th - possibly a day for another date (you never know - Scotland perhaps?). Tickets go on sale this Thursday at 10am (London) and 9am (Manchester), priced at around Â£18.50. Expect these gigs to sell fast.