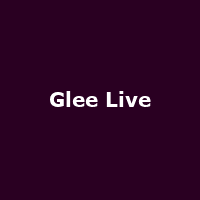 The high-school pupils of William McKinley are so full of Glee that they want to repeat their successful US tour - with a whole new production just for Europe! Of course, the popular favourites such as "Toxic" and the theme-tune "Don't Stop Believin'" will also be featured, but a new brace of performances from the show's stars, including Cory Monteith and Lea Michele, looks set to pull in the crowds once more.

The dates confirmed so far are on 22nd June in Manchester, 25th-26th June at the London O2 Arena and 2nd-3rd July in Dublin. Tickets will go on sale from next Friday 26th November with prices costing from around Â£45, rising to Â£55 depending on seats.

Cory Monteith sums up the excitable mood within the Glee camp right now - he says "We had so much fun on tour last year that we were all itching to do it again".

Currently the US is broadcasting the second series, with a third just recently commissioned for production - when it comes back to the UK is anyone's guess - so let's say 2011!!

With the initial London O2 arena dates now sold out, an extra pair has been added for Tuesday and Wednesday 28th and 29th June. Tickets go on sale from Monday 6th December at 9am, starting at Â£45.