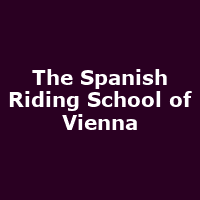 The Spanish Riding School of Vienna

Next year, the highly-acclaimed Spanish Riding School of Vienna will return to the UK for the first time in 5 years, by performing at Wembley Arena during a three-day residency (as part of an international tour).

The new show, which will feature Lipizzan horses, classical dressage including 'work in-hand', the "Pas-de-Deux" and "Airs Above the Ground" - basically highly technical and graceful equine movements. The choreography and dressage is set to classical music. If you want proof of just how highly-regarded the School is in Austria, they minted a 5 Euro coin a few years back in honour of its home-building, the Hofburg Palace in Vienna - quite an accolade.

Originally the main crux of the show was performed exclusively for royal court members, but nowadays the School displays its talents for the public to witness. 2011 will see the company present a brand new show entitled "The Imperial Dream".

Tickets are now available for the evening performances at Wembley Arena, running from 25th to 27th November 2011- prices start at Â£55 plus fees with demand likely to be high (hence the early on-sale date).