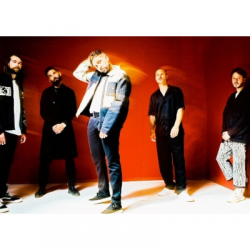 Bet you've been aching for a bit of Blink-182 action, right? Well, lots of people have and it appears as though their wishes will be granted - Tom, Travis and Mark are heading back for a selection of large arena dates next summer.

They last played here at the Reading/Leeds Festival in August (as well as a couple of Scottish dates earlier in the year), but this will see the boys tackle an audience on their own.

Using our powers of deduction (and the fact there are a few gaps between the chosen dates, more cities might get added). For now though, Blinkmania will hit Manchester on 8th July, followed by Newcastle (12th), Nottingham (13th), Birmingham (15th) and finally the O2 Arena, London on the 18th.

Tickets go on sale on Friday (26th November) at 9:30am - blink and you'll miss your chance!

The band's other key activities include finishing off a brand new album, set for a release in 2011 with a single (possibly "Up all Night") due in January.

Of course if you can't wait that long to feast your eyes on at least one member of Blink-182 kicking out some angular riffs, check out Tom Delonge's side-project Angels and Airwaves who are also coming to the UK next year, this time in February from 1st February (Glasgow) through Manchester, Birmingham and the HMV Forum in London on the 4th - tickets are on sale now at £17.50-£18.50 plus fees.

A second O2 Arena date has now been added for Tuesday 19th July. Tickets, costing £35 are on sale now.

Also announced is a date at Sheffield's Motorpoint Arena on 7th July. So, dates so far have been limited to just England... not so great if you come from Wales, perhaps? But fear not - a date has now been added for the Cardiff International Arena on 16th July! Newcastle is the furthest north they will venture, but maybe, just maybe they'll announce a Glasgow date to keep the Scottish fans happy? Tickets for Sheffield and Cardiff will cost £32.50 and go on sale tomorrow morning (Saturday 27th Nov) at 10am.

Support for the entire tour comes from Surrey pop-punkers You Me At Six - a massive leg-up for the guys who must be pretty chuffed!