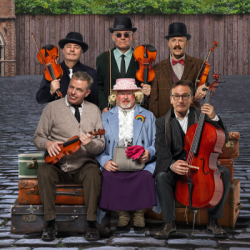 Here is another round-up guaranteed to lift the gloom this autumn and to give you a cosy glow inside. Proof that the recession hasn't clobbered ticket-sales is proven by the amount of sold-out events set to take part this week.

Enjoying something of a resurgence these days is Madness, due in part to the success of "Norton Folgate" and Suggs' ever-expanding profile. The Camden Nutty-Boys have been busy working on the follow-up album, some of which you may well hear during their tour (with Paul Heaton as support). From Blackpool next Friday, right through to December, many dates have sold out completely - the matinee concert in Newcastle on Sunday is still up for grabs though - £26.50.

Buster Bloodvessel is still doing the "Can-Can", kicking out some "Lip Up Fatty" and giving you the licks from "My Girl Lollipop", even though he's now in his 50's. And why the heck not? If you fancy a good old Ska knees-up then catch them on the start of the 'longest tour of the week', beginning on Thursday in Newcastle. Tickets are £15.

The earnest and melodic singer-songwriter returns with sister Martha, complete with a new album under his belt. "All Days are Nights: Songs For Lulu" earned him more critical acclaim and another Top 30 album. Despite losing his mother Kate McGarrigle to cancer at the beginning of the year, Wainwright has admirably carried on and the concert on Monday at the Royal Albert Hall will no doubt pay some homage to her. Tickets are now limited to £50/£70 premier seats.

The American alt-rock outfit return to Britain on Wednesday for the start of a string of gigs, beginning with Nottingham. Tickets are still available surprisingly - £22.50 will gain you admittance, although two out of the three December dates in Brixton are sold out.

Old muscle-man's back, proven recently by his third Top 10 album "Accelerate" and its preceding hit single "Defender". If you wish to throw your underwear at him (eh boys?) then his UK tour begins in Plymouth on Friday - but, like most of his tour, it's sold out of course. Cardiff is still available on 3rd December for £28.50 - click his image for details of the rest.

Sticking with potential ladies' nights, the aptly-named show-tour with Lulu, Heather Small and Anastacia will test the strength of venue's supplies of wine glasses from Monday onwards in Edinburgh. Tickets are still available for £45.

British rapper Kano is out on the road for a short jaunt around the UK, starting with an under-18's night in Leicester on Thursday, followed by Preston on Friday. Tickets are still on sale with the Leicester bash costing a tenner and remaining nights being £12.50-£15.

Another highly-rated American outfit have managed to sell-out the majority of their forthcoming tour which starts on Thursday in Blackpool. But Brighton and the two Ally Pally nights are still up for grabs - £20-£22.50 will get you in.

With all the interest surrounding the near sold-out "Fela!" show in London, you might like to check out his son and heir to the Afrobeat throne, Femi Kuti. He is set to play five concerts, starting with Brighton on Saturday and London's Barbican on Sunday. Tickets are £19.50-£20.

Moving from one legend to another, this time in the world of clubbing and house/garage maestro Todd Terry returns to Manchester's infamous Sankeys venue on Saturday night - if you want to get in and see the man supported by X-Press 2, it's a small matter of £12.50 to pay.

And staying with Manchester, the city's most enduring survivors of the heady days of Peel Sessions and long macs, The Fall are back from Tuesday onwards. The Electric Ballroom in London (£20) will be followed by Bexhill, Holmfirth, Leamington, Exeter and finally Bath - all costing £17.50 to £20.

One could argue that the most eagerly-awaited gigs next week are from the biggest names. One thing that you can't argue with is each outfit's common bond here - the following have pretty much sold-out, but for trusted resales. The National re-launch their already hugely-successful "High Violet" set on Monday, two days before their short tour begins in Bristol. Primal Scream start their "Screamadelica" residency at Kensington's Olympia on Friday and Saturday

One of many children's shows or pantomimes starting next week, is the charming tale of The Gruffalo written by Julia Donaldson. The Garrick Theatre in London will host this tale of a cunning mouse's adventures as he fibs to the animals he meets, claiming there is a Gruffalo (a scary monster). Upon actually meeting a real one, the real adventures begin! Plays from Wednesday onwards, tickets cost £12.50-£15. Check our Pantomime Guide (link in the sidebar) for more great family-show ideas for the Festive season.

Designed purely for children by, erm, adults is the phenomenon the Chuckle Brothers. The haphazard world of anarchic stupidity is something I witness on London's trains nearly every morning, however from Thursday onwards starting in at the Southport Theatre, you can see the same thing as the dopey pair present their Twelve Days of Christmas tour for £17.

Grand Guignol [Theatre of the Damned]

Theatre of the Damned presents a truly horrible nightmarish drama in the form of a Paris asylum in Grand Guignol. Etcetara Theatre present three weeks of this classic tale that is definitely not for the faint-hearted. Macabre tickets are just £10.


Barbra and Frank - The Concert That Never Was

This musical-show takes place at London's New Players Theatre from Wednesday onwards and features a performance of Streisand and Sinatra classics, as if the two really had sung together. Tickets cost £22.50-£35.

They've got talent, that's for sure and the award-winning dance troupe return with a near sold-out tour which starts in Belfast on Sunday. Many nights are sold out, but those that aren't will cost you around £21.50. You might also like the one-off show Enter The Battle, a show featuring a dazzling array of street-dancers, free-runners and extreme martial-artists - tickets cost £19 upwards for the IndigO2 event on Sunday.

The comedy-club chain begins its Christmas season with several mixed comedy nights up and down the UK - Camden, Birmingham, Edinburgh, Leeds and Reading venues will all kick off a whole bunch of laughter-making evenings with tickets costing £24.95-£39.95, with the option of a festive dinner thrown in (well, served up on plates probably).