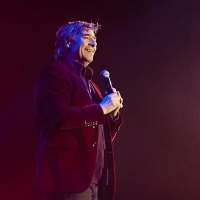 Author of the best-selling book "Vive Le Revolution, socialist and Independent columnist (or 'commentator', as they now seem to call them) Mark Steel has announced a few more trial-and-error, sorry, work-in-progress nights in the coming few months, as well as a 2011 tour.

The well-read comedian will appear for three nights at Islington's Pleasance on 19th/26th November, plus the newly-added evening on 22nd December - tickets are still available for all three, priced at £7 which, even for something that might be chaotic and slightly rehearsed, is a bargain and ultimately more enjoyable than Prime Minister's Question Time (but more useful).

All of which leads Steel into another tour next year, supporting his recent book "What's Going On. The Meanderings Of A Comic Mind". After turning 40, Mark thought that life would begin - instead it's actually been a bit rubbish and this tour will reveal whether he's actually sussed it all out yet, or just turned into a grumpy curmudgeon.

Renowned for his incredible takes on various world revolutions ("Vive Le Revoltuion"), Steel is pin-sharp and very funny. Tickets are on sale now, priced at £13-£15.