Is it gonna be worth it? Children of Bodom guarantee their 2011 UK tour certainly will be 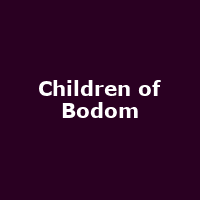 Finland's premier death-metal outfit Children of Bodom have just announced a long-awaited UK tour in support of their as-yet-untitled seventh album, due out next spring. It's been a while since this ferociously heavy band hit these shores and next April heralds their return.

Six dates have been confirmed so far, starting with Norwich on the 1st April, followed by Manchester, Glasgow, Nottingham, Birmingham and finally London's Forum on 9th April - tickets have literally just gone on sale, priced at Â£19.50 - Â£22 plus fees.

COB's last self-penned album "Blooddrunk" was their first big UK success in 2008, yet the band have crankin' out the intense riffs for well over a decade now, without sticking to the same style. Their last album proper was a curious covers set, "Skeletons in the Closet" - death-metal version of Britney Spears, anyone? 2011 will see the fruits of their labours with the man behind Slayer and Monster Magnet and Slayer producer, Matt Hyde. It's highly doubtful it'll be a nu-folk crossover set then!