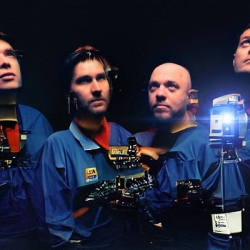 In one form or another, the NME Awards tours have been taking place for 15 years. It's fair to say that despite the hype and expectation that the UK's premier indie-rock title might generate, the line-ups have, at times, been a little underwhelming.

Nonetheless, some of today's biggest bands have enjoyed the NME leg-up and there are impressive names on the roster for previous tours. The Arctic Monkeys, Maxïmo Park, Coldplay, Florence and the Machine and The Killers have all featured. Going back to the earliest shows, 1996 was headlined by The Bluetones and, two years later, by The Stereophonics. Last year's tour showcased the emerging and indisputable talents of The Drums and Bombay Bicycle Club.

This time round, the four acts are Canadian electronica vanguards Crystal Castles, dubsteppers Magnetic Man, indie rockers Everything Everything and latest Next Big Thing, London's The Vaccines.

The tour opens on 3rd February at Glasgow's O2 Academy, closing just over a fortnight later on 19th February, when the quartet play London's O2 Academy Brixton. The NME Awards 2011 ceremony will take place on 23rd February at the same venue.

The eleven dates in the interim include many of the usual suspects - Manchester, Nottingham, Leeds, Birmingham, Cardiff and Brighton to name a few. The gigs usually throw up a few surprise headlines - a hitherto unheralded Florence stole the show on the 2009 tour - so tickets are in high demand and usually sell out very quickly.

Tickets will be available here from Friday 12th November at 9AM, costing a penny under £16.60 regionally and ten pennies over £21 for London.