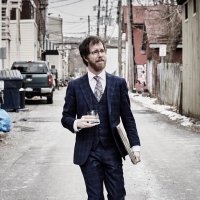 It isn't often that a best-selling author turns to writing lyrics, but Nick Hornby has done just that with American singer-songwriter Ben Folds for a new project entitled "Lonely Avenue". Released in September, the album contains 11 songs which have been co-written by Folds and Hornby, with the former contributing the lyrics to the songs (music written by Folds).

Hornby wrote the words prior to Folds' musical involvement. The author admitted in a CNN interview recently, "I had never had go at (writing lyrics) before - I had to pay attention to line-length etc". It seems the pair want to work together again, both hinting at a volume two.

For now though, Ben Folds will be bringing "Lonely Avenue" to the UK/Ireland next year, probably without Hornby on board but with a set-list that is sure to cover the album off, as well as a few previous Ben Folds Five songs and a good old dose of piano-pounding (he's good at that). To get an idea of how the album came about, have a gander at the short film!

The tour begins in Dublin on 18th February and continues to Birmingham, Hammersmith etc until Sheffield on the 26th. Tickets seem to be going on sale on either Friday (Birmingham and Glasgow) or Saturday - the rest. Prices start at Â£25.