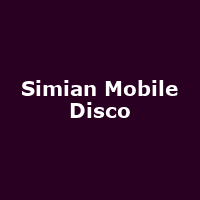 "I'm a hustler baby/that's what my daddy's made me" - a sad indictment of today's greedy society or merely one of the muckiest club-tunes from the first decade of the 21st-century? Simian Mobile Disco were the perpetrators of "Hustler" in 2007, as well as the sleazily-titled "Tits and Acid" and catchy "I Believe".

The duo have moved on and re-discovered a more techno-edge for their new projects called Delicatessen and Delicacies, the first being a new live touring club-night event started earlier in the year, the latter more importantly the title of their forthcoming third studio album. Inspired by various bizarre food-dishes sampled during their travels around the world recently, "Delicacies" features such culinary-challenges as "Aspic", "Sweetbread" and "Nerve Salad" and will get a release on 29th November in a double unmixed/mixed format.

Just a few days earlier (26th Nov) in a 'secret location' in SE1 (not that secret, it's Union Street Car Park initially), SMD will officially launch that album with a 'Records and Machines' set that will see them perform and play their own 'delicacies' using analog-synths and CDJs. The unpredictable and acclaimed Nadia Ksaiba is DJ support for the night.

Tickets have just gone on sale for this event, priced at Â£12.50 plus fees. In addition, Delicatessen itself continues it's mouth-watering rampage around the country with stop-overs in Manchester (3rd Dec) [now sold-out - Ed] and Leeds (4th) - tickets are Â£15-Â£18.50.