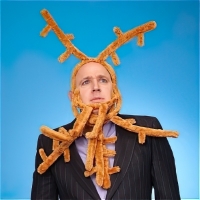 "Exit signs - they're on the way out really", "Velcro, what a rip-off!" and "I've just been on a once-in-a-lifetime holiday - tell you what, never again".

You should know the Tim Vine recipe by now - puns, puns and more ridiculous puns, delivered one after the other in a relentless fashion without resorting to abusive language or vapid remarks about dull celebrities.

His recent "Joke-amotive" tour has been such a success that he has added a few more 2011 dates to give you a chance to witness the wordsmith-wizard at work. This week, he has just added Hastings to the run - tickets are now available for that extra bit of Vineage on 6th May (the full list is below).

In addition to his tour, the 'Punslinger' has also got his Tim Vine Chat Show lined up and ready - the new format entails YOU becoming part of the show which will be playing at the Albany Theatre, London on 9th and 29th November. It'll be chaotic in the usual Vine way, but for just £6 and a small fee, it's got to be worth attending.

"I'll leave you with this - well, I didn't bring it with me - one-armed butlers, they can take it but they can't dish it out". Tish!!