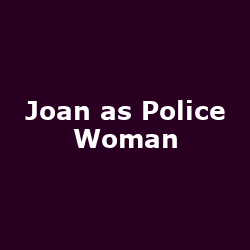 It's been a wee while since American singer-songwriter, guitarist and, more recently, session-violinist Joan Wasser (or Joan as Policewoman) graced our shores with a tour, but the intensely intimate performer has her air-fare sorted and is coming back to the UK. Naturally, there is also a new album - entitled "The Deep Field", Joan has hinted that the album is about 'a small part of space' and 'cosmic'. Previous collaborator Bryce Goggin has once again been enlisted to produce the songs, 8 of which were completed as long ago as March this year. It gets a release sometime in January.

Meanwhile, the tour begins in February on the 1st in Oxford and continues through many usual cities including Bristol, Nottingham, Manchester and London (at the Barbican - 6th) until touching down in Portsmouth on 13th. Tickets go on sale Friday 5th November and should cost around £15-£20.

In recent years, Joan has been lending her violin-skills to a few esteemed artists such as David Sylvian, The Guillemots and now Lloyd Cole, on his recent "Broken Record" album, as well as releasing her most recent "Covers" set in 2009. "The Deep Field" will be her first self-penned set as Joan as Policewoman since 2008's "To Survive".