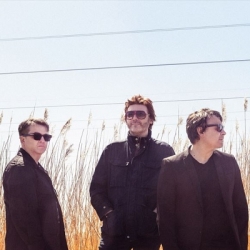 Manic Street Preachers have today announced the postponement of tonight's and tomorrow's 'Postcards from a Young Man' gigs at the Brixton Academy.

This comes just days after the postponement of their Birmingham gig on Tuesday, because singer and guitarist James Dean Bradfield contracted laryngitis earlier in the week. The three dates have now been rescheduled: Birmingham to 14th December, tonight's date to 21st January and tomorrow's date for 22nd January.

Ticket-holders are advised to hold tight, but if the dates are not convenient, you may obtain a refund from your point of purchase.

James had this to say about the postponement:

I would like to personally apologise to the fans. Nothing makes us feel worse than having to postpone a show. We were particularly looking forward to playing two nights at Brixton as we have such special memories of previous gigs at this venue. To say we are gutted about this situation is putting it mildly!

At the moment, next week's Halloween date in Leicester, as well as the Cambridge and Carlisle dates are going ahead as planned, but of course if we hear to the contrary, we'll let you know.