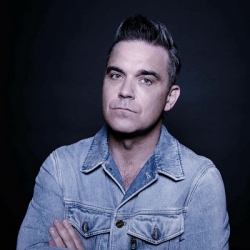 Who'd have thought it? Robbie Williams re-joining Take That may have a slight whiff of 'Christmas marketing move' about it, but after his patchy solo material in the latter period, the boy from Stoke has hooked up with his old buddies, had a manly cuddle with Barlow on his hit "Shame" (from his already-issued "Greatest Hits" collection) and parked his bum under the table marked Take That song-writing partnership once again. Oh and they've just scooped the Hall of Fame gong at the Q Awards.

You can witness the fruits of these labours on the typically dramatic video for the new single "The Flood", due out on 14th November digitally (15th physical). It's just to the right!

Daft question, easy answer - the boys have just announced a UK tour in support of their forthcoming new album "Progress", which gets a release on 22nd November.

The first dates confirmed are Sunderland on 30th June, followed by Manchester on 3rd-7th June, Cardiff 14th June, Dublin 18th June, Glasgow 22nd-23rd June, Birmingham 27th June and finally 1st-5th Wembley. The theme for the tour has not been revealed but the band announcement during their press conference this morning that it would be 'a spectacular stadium production'.

Images for the album's cover have been drip-fed onto the group's website recently, but we are assured that the boys will have bought some clothes by the time of the first date.

Tickets will be available here from Friday 29th October at 9AM starting at £55 + fees - ticket servers will be overloaded, so... have a little patience...

Four extra dates have been added to their stadium tour: one for London, two for Sunderland and one for Manchester and in addition, one of the Wembley dates (3rd July) has been moved to 30th June. The new dates are: 4th July in Wembley, 27th and 28th June at Sunderland's Stadium of Light and one at Manchester City's ground on 12th June.