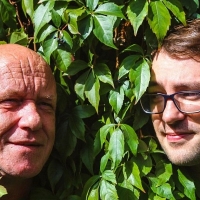 Rather than tucking him away on a five-minute passage in the middle of the album, Orb-lord Alex Patterson mixed a jamming session with Gilmour around new beats and swirly synths and ended up with an entire 50-minute album that reached number 12.

You can watch a promo-video for an excerpt from the album right here.

The success of "Metallic Spheres" has prompted a couple of live dates and a bit of Orb Soundsytem action over the next couple of months, beginning with the 'Dub Spheres Orb Gala' at the inSpiral Lounge in Camden on 20th November 2010. It's £6 to get in and Manasseh (dub-roots) add to the vibe. In December however, it's a pair of Orb live concerts that catch the eye with two major dates in London at the Scala on the 11th and Manchester on the 12th. Tickets are on sale now, priced at £15-£16 and expected to sell through quickly - it's unlikely that Gilmour will play (but you never can tell).