Want to see them like this? - The Joy Formidable announce 2011 UK tour 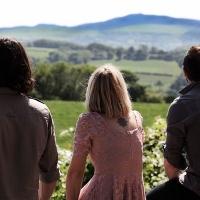 Much-touted and much-fancied are two terms that get over-used when bands are being 'sold' to prospective punters, even I've done it, but The Joy Formidable do possess a certain je ne sais quoi about them - after several cracking singles, including "Whirring", "Cradle" and "Popinjay", plus a slot on the recent NME Radar Tour, it feels about the right time a debut album appeared.

Rumoured to be called "The Big Roar" and due for release early next year, the album has been mooted for some time but the reality has now started to bite with the announcement of a UK tour in February next year.

The first date is on 1st February in Bournemouth, followed by Bristol, Birmingham etc until London's KOKO on 14th. Tickets go on sale tomorrow morning (22nd), although their date in Cambridge appears to have slipped through the net and is purchasable now at £10 plus a fee.

Their recent single "I Don't Want To See You Like This" appeared last week, supported by a decent video that involves the band thrashing away on a beach and getting all mucky in the woods - it's certainly a rousing slice of peace-shattering pop.