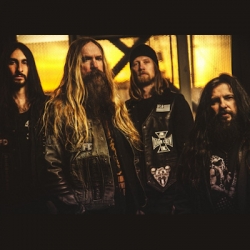 Zakk Wylde will be familiar to anyone who happens to have been an Ozzy fan for a few years - he was Mr Osbourne's guitar-wielding right-hand man for twenty years, playing on his "No Rest For The Wicked" album right up to 2007's "Black Rain". In between all this activity, Wylde was busy crafting his own blend of blistering rock with the band Black Label Society.

This year saw the release of their tenth album (their eighth studio set) in the form of "Order Of The Black", which earned itself a Top 5 Billboard placing back in August. Although Wylde has suffered a few health set-backs recently, he is determined to hit the UK next year and has announced a series of dates throughout February.

First stop is Osbourne's spiritual home of Birmingham on 14th Feb, followed by stops in Newcastle, Glasgow, Hammersmith etc until the final stop in Bristol on the 23rd. Tickets are now on sale, priced at £18.50 (£22 for London) plus usual fees.