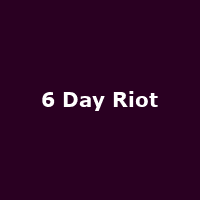 Hovering on the verge of press and public accolades for some time now is folk-pop band, 6-Day Riot and, no, they didn't name themselves after the recent French pursuits of unrest, but instead came together in 2006. After numerous line-up switches, the current ensemble seems to have settled down a bit, particularly with the warmly-received "6-Day Riot Have A Plan" album in 2009.

Their next album is 'good-to-go' - entitled "On This Island" and due out on 1st November 2010, it heralds the start of some considerable live-activity from the quintet (oh yes and a single called "Take Me" has also just appeared this week - you can watch the official video right here). So, if you fancy a jamboree of brass-spiked nu-folkisms with a hint of pop, you'd better start taking notes because 6-Day Riot are playing everywhere but my bathroom, it seems.

From next Wednesday onwards you can catch them headlining, co-headlining or setting up for a session, including Cardiff with Kid Canaveral (27th Oct), Manchester with Bearsuit (30th), a freebie at the Inverness Mad Hatters on Guy Fawkes night, London's Jazz Cafe (10th Nov, curiously with comedian Richard Herring) and the newly-added Exeter Phoenix (14th). Tickets are around the Â£7 mark, even the gig in the capital. I should have made gig plural - there is also the Xmas Remedy night at the Tooting Tram on 17th December, featuring 6-Day Riot. It's all 'go'!

Prior to all of this, the band head off to XFM-world for a session with John Kennedy next Monday (25th) - certainly got to be worth a listen.