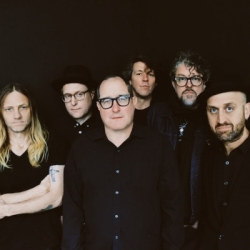 America continues to get all excited about rock band The Hold Steady - their recent album "Heaven Is Whenever" made the Billboard 100 with considerable ease and their recent US tour has sold out (or as near as). They lost keyboardist Franz Nicolay recently though but recruited Dan Neustadt in time for the album sessions, so all is good.

Regrouped, The Hold Steady appear in the UK next year for a tour at around the same time as a set from The Baseball Project, Finn's other musical sideline that also stars Steve Wynn (previously of Dream Syndicate), sees a release.

I'm sure a few extracts from this project and Finn's usual 'day-job' will be performed live on the tour which starts on 4th February in Southampton and continues via Bristol, Birmingham, Newcastle and Manchester, finishing in London on 18th. Tickets for the full schedule below cost around £15 and go on sale this Friday at 9am.

Meanwhile, lead singer Craig Finn has been dallying with Frightened Rabbit for a cover of Elton John and Kiki Dee's chart-topper from 1976, "Don't Go Breaking My Heart" - a comment on Nicolay's departure? Actually no, the split was amicable according to Finn and Franz has already got a solo album ready for release in the next few weeks (we'll be reviewing it soon as well).