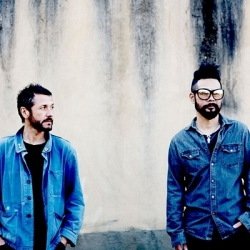 A few critics had written off Feeder a few years ago but this year's "Renegades" album has proven to be a bit of a sleeper. Their fifth Top 20 album and choc-full of power-rock nuggets, it finds the band beefing up their sound and turning up the volume - and there's nothing wrong with that of course.

Feeder's upcoming October tour has now officially sold out (save for a few re-sales) which means that the array of support-bands due up on the tour, must be rubbing their hands in collective glee at the thought of reaching a wider audience (providing the punters aren't spending that valuable time queuing up for a snakebite and black).

Feeder themselves still have another date on the calendar to fulfil - Kerrang's Xmas Party being held at Birmingham's O2 Academy on 9th December with tickets priced at £16. With Futureheads and Love Amongst Ruin in support, it's likely these will sell out as quickly as the UK tour. Next year the band will play in Australia and Europe, with possibly some new material looming on the horizon later on.

The support bands confirmed for Feeder's tour are the excellent fuzz-rocking Dinosaur Pile-Up (at Oxford and Southampton) who are also on tour themselves from 16th - 27th October (part of the rescheduled dates from earlier this year), Brooklyn duo Black Gold (at Manchester, Wolves and Shepherd's Bush) who are also playing a warm-up gig at London's Bull and Gate on 26th Oct (just £6) and London's power-rockers Cape Fear (covering support in Leeds).

Brigade, who are supporting Feeder at the Glasgow concert, will embark on a November tour beginning in Birmingham on the 20th and continuing via Glasgow (again), Lancaster and more until the Bull and Gate on 30th - Tickets are £6/£7. Finally, Morning Parade will support the Welsh rockers in Bristol and also Shepherd's Bush, before returning to their Harlow homestead on 16th December for a special Christmas shindig - £8.50 gets you in.