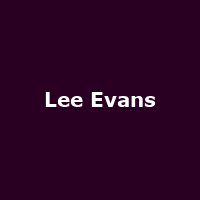 He's hyper-active, he's a bit manic (a bit?) and still really funny. Lee Evans is a remarkable whirlwind who has made a career out of looking like a rabbit in the headlights and sweating like a 'nun awaiting a pregnancy test' on stage, but get him on a subject like footballers, the Olympics or Parcelforce and watch him go.

If you missed his last tour in 2008, you have another chance in this lifetime to catch him again with a brand new tour of the UK. Titled as 'Roadrunner', Evans has confirmed around 50 dates running from 25th August to 20th November, including several multiple dates in most of the chosen cities. Expect lots of new material and gags.

So if you live near Bournemouth (his first stop), Brighton, Nottingham, London (Wembley Arena and the O2), Birmingham, Sheffield, Glasgow, Aberdeen, Newcastle, Belfast, Liverpool, Manchester and Cardiff, you'll need to be here at 9am this Friday - his last tour pretty much sold-out. Dublin also has a date confirmed for 26th October. Tickets for all dates will cost Â£30 (â¬39.20 for Dublin) + fees.