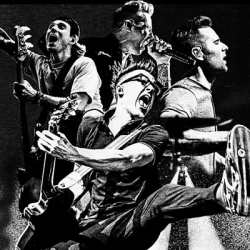 Are you a fan of pop stars and chart music? Want to attend the biggest pop-party of them all, held under one roof for one inclusive price? Are you able to get to Birmingham on Saturday 27th November by 6pm? If you answered 'yes' to these three life-changing questions then you'll certainly want to go to this whopping great evening.

Local radio station BRMB has hooked up with the LG Arena (NEC) to bring you BRMC Live 2010, an event which does exactly what it says on the flyers - gathers up the biggest names in pop and presents them back to back for one evening only.

Boy bands are represented by McFly and The Wanted, the former with a new(ish) sound on "Party Girl", the latter with "All Time Low" and an upcoming debut album due in two weeks.

Go X-Factor crazy for Joe McElderry, Diana Vickers, Olly Murs and Shayne Ward - McElderry's debut album "Stay Awake" is unleashed on 25th October while Murs has his second single "Thinking of Me" out just a week before this gig.

The remainder of the bill will feature all-girl The Saturdays, The Hoosiers, Example and jolly James Blunt who has his third album "Some Kind Of Trouble" due out in November.

Tickets cost £29.50 for the entire evening (plus fees) and are available now - but hurry, this is a huge event and set to sell out quickly.