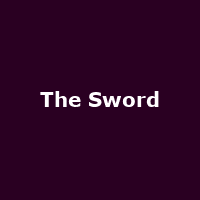 I've been feeling like the American heavy metal voice of doom, what with the recent spate of cancellations from US metallers over the past few weeks. So, continuing in that vein, here's another: The Sword. The band from Austin, Texas have just announced the departure of drummer Trivett Wingo (great name) and hence the cancellation of all forthcoming tour commitments.

The band were due to commence a twelve date UK and Ireland tour starting in Portsmouth towards the end of November. The band will soldier on, though, hoping to recruit, regroup and hit the road "as soon as humanly possible".

It's all amicable, apparently, with Trivett stating on the band's myspace (www.myspace.com/thesword):

It is with deep sadness that I am announcing my departure from The Sword. After nearly seven years and some of the most amazing adventures of a lifetime, I have arrived at a place where I am physically and emotionally unable to continue on as part of The Sword. If I could go any further, I would as I love the music and JD, Bryan and Kyle are people that I deeply respect, but I have reached a point where I just can't do this anymore. I would like to thank the wonderful people who made this experience what it has been: the fans, the people that I have worked and all of the bands and musicians that have inspired me over the years. I thank you and apologize for any disappointment that this may cause anyone, not least of which The Sword.

Remaining band members JD, Kyle and Bryan had this to say:

We wish Trivett nothing but the best, and it is with heavy hearts that we bid him farewell. He is a phenomenal musician and has been an integral part of this band's success. He helped to lay the foundation that we will continue to build upon, and we wouldn't be where we are without him. We wish he could continue the adventure with us, but we understand that the life of a touring musician is not for everyone. It's been a hell of a ride, and we're sad to see this part of the journey end. The show must go on, though, and we'll be back on the road as soon as humanly possible.

If you have tickets, it's probably best to obtain a refund from your point of purchase - we'll keep you posted with any tour updates, of course.